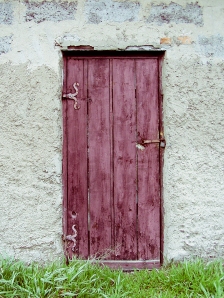 A few weeks ago I found myself stuck behind a tractor-trailer. On its tailgate was a bumper sticker that said something along the lines of, “Doing it God’s Way”. I don’t remember the exact wording, but the meaning kind of struck me.

There I was, on the road, just driving, and I had to stop and think if I was going “God’s Way”. Was I steering my life towards God’s path for me? Did God have a path for me to steer towards?

It is strange to think, but not many people in the Bible have a great moment of clarity when God speaks directly to them. Moses had a burning bush. Paul was blinded. Jonah was swallowed by a whale, but overall most people just stepped out in faith

So, how did they know they were on the right path? Then I began to think to myself of the man who turned away from Jesus. I talked about him in my last post. He was given a great opportunity and simply chose not to take it because he was in love with his possessions.

He missed out that day, but what about the next day? How many opportunities did he receive after that and did he turn them down.

DOORS WITH NO KEYS

I think as humans we like to plan out our lives in our heads. We like to envision were we will be in the next three months, the next five years, when we retire, and so on. We like to know what is going on and we do that by planning it all out.

It is true that many people set out on long-term goals and succeed, but does it every really turn out the way we expect. Did the school degree give us our dream job? Was marriage just like the movies? Is owning a house what you excepted or a giant money pit?

The plans we make are not the best plans. We come up with some bad ideas for ourselves and don’t even realize it. Even if we are in step with God’s will, we really don’t understand it. Proverbs 20:24 says, “Man’s steps are ordered by the Lord. How then can a man understand his way?”. I think that brings me to a point of peace. It is reassuring that I don’t understand where I am at because God is directly involved.

I like to think of it this way. Everyone has a series of doors in their life. Some are school, work, friends, or any other life decision. The problem is that sometimes we choose a door and it is locked. So, we keep trying to open it and it just won’t budge. God has that door shut for a reason, but we keep trying to force it open.

The problem is we become fixated on the one door that won’t open. There are other doors and we are too busy trying to bust through the one door God doesn’t want us going through. We just haven’t been given the key to that door.

LOOK AT THE KEYS

I think we are too fixated on the doors in our lives. Who will I marry? Where will I work? How can I make money? These questions are a waste of time. God closes doors for good reasons. Proverbs 16:9 says, “A man’s mind plans his way, but the Lord directs his steps and makes them sure.” God will protect us from our own bad decisions.

I think if we want to attempt to figure out what God wants us to do with ourselves we ned to stop looking for doors. There are many doors we can take in our lives. It is part of our free willed nature to explore all the options in our minds. Honestly though, I think when we are looking for the doors God wants us to take we need to look at the keys we are given.

For example, look at the talents you have before trying a door. If you aren’t good at art, don’t try to be a painter. If you hate public speaking, don’t try to be a minister. Simply put, what gifts has Good given you? It you are not sure, just ask someone you trust. They’ll tell you.

At that point I think you’ll gain perspective on what doors God is leading you towards. Look at your keys. Then the doors that are locked will simply come right open.

Behold, I stand at the door and knock; if anyone hears and listens to and heeds My voice and opens the door, I will come in to him and will eat with him, and he [will eat] with Me.

I just wanted to finish by saying that God is searching for all of us. According to this scripture he is knocking and we need to let him in. We have doors into our lives. Sometimes we let the bad in and some times we let the good in, but Christ is the most important thing to let in. If you want direction for your life, let Christ in for dinner. Have a seat with him and talk to him about your life. Open the door and let him eat with you. It sounds simple in concept, but all types of people avoid opening the door. Just don’t be the one that is going to sit there and eat alone when God is right outside, knocking and waiting to come in.